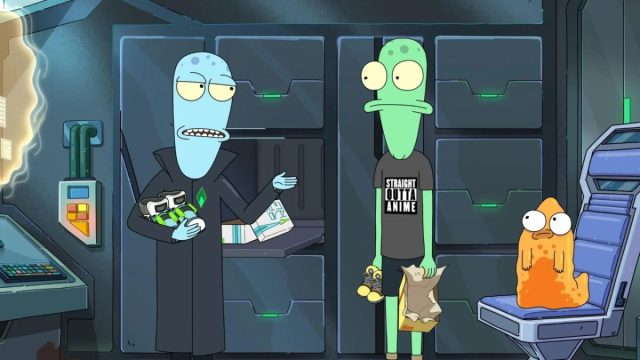 In the living fantasy world of Hollywood and the entertainment industry at large, the highs can reach the cosmos while the lows can hit rock bottom and begin to dig.

In recent months, there’s been a revolving door of celebrities who have tainted their public personas and sent fans to the nearest exits. Kanye “Ye” West and JK Rowling immediately come to mind, but it’s Rick and Morty co-creator Justin Roiland who is the latest celebrity being put through the wringer for good reason.

Having risen to fame after Rick and Morty became an Adult Swim sensation in 2013, Roiland had been riding high for the past decade. Prior to co-creating RAMhe had been a prominent voice actor, lending his talents to many cartoons, most notably guest starring in episodes of Adventure Time and Gravity Falls. Once he became a recognizable name among Adult Swim audiences, he was soon crowned a nerd culture king. From there, he began developing independent video games with his trademark voice and self-aware, raunchy humor. He even landed a separate creative deal with Hulu for another adult cartoon, Solar Opposites.

So it was that Roiland was ushered into the head of the nerdy table, and he was soaking up the adoration when it all came crashing down. In true Hollywood fashion, the ghosts of his past returned to haunt him when he was arrested on domestic violence charges. Those stemmed from a 2020 incident, and now he’s awaiting trial, which should take place in April.

If that wasn’t bad enough, more allegations have since come to light. He made reprehensible comments about underage girls during a podcast interview and his vile direct messages with different women that reportedly included those to a 16-year-old have been made public.

What was once a beloved writer, producer, and voice actor has officially fallen from grace. Roiland’s alleged actions have shredded his public image, and it’s left a noticeable stain on anything with his name attached to it. Fans are heading to the exits in droves, and it leaves everything connected to him in doubt.

While he’s best known for co-creating Rick and Morty and Solar Opposites, his creative list goes much further as fans decide if they want anything to do with his formerly worshiped brand of humor. How far does the list go? Take a look at the most prominent of Roiland’s creative and producing credits, all of which now have question marks hovering over them.

After the overwhelming success of Rick and MortyHulu struck a deal with Roiland and his co-creator, Mike McMahon, for another animated, sci-fi sitcom, Solar Opposites. While it hasn’t reached the heights of RAM, the show has been carving itself a niche audience. However, the recent troubles could have it on the chopping block.

Streaming services are notorious for giving the ax to even the most popular of its shows. It all comes down to budget in most cases, and it takes a large viewership to warrant the costs. That’s why Neil Gaiman’s The Sandman, which was a massive hit for Netflix, had such an uncertain future before season two was announced. In the world of entertainment, profits rule the bottom line. With Roiland in the hot seat, it will surely pull viewers away from it Solar Opposites. Since it wasn’t on a RAM level in the first place, this could be the proverbial straw that broke the camel’s back from Hulu’s vantage point. It doesn’t help that Disney owns the streaming service, and publicly traded corporations tend to distance themselves from controversy as quickly as possible. It’s hard to imagine that a show with a fringe audience co-created by a writer with serious allegations against him would be renewed.

For all intents and purposes, this isn’t exactly a major show in Roiland’s creative history. In fact, it was only a series of shorts that poked fun at the internet’s obsession with the infamous video of the same name (minus the show part for obvious reasons). Roiland’s sister, Amy, is credited as a co-creator and has appeared in the episodes. Considering the charges leveled against him as well as accusations of highly inappropriate behavior toward women and teenage girls, 2 Girls, One Cup: The Show takes on much darker connotations.

This is a game rather than a show, but it bears mentioning. After all, it’s Roiland’s creation, and he does basically the same voices. By and large, it plays like an episode of Rick and Morty complete with Roiland using his Morty voice for the sentient gun’s dialogue. For that matter, players start the game in a Doom spoof with Rick Sanchez’s voice guiding the way.

The irreverent, sitcom-style humor, nihilistic overtones, and penchant for shock-value gags scream Rick and Morty. It’s hard to play the game without waiting for one of the titular characters to burst onto the screen. There’s no subtle connection here, and it stands for reason that Roiland would have been thinking about a crossover at some point in the future. Perhaps it would have been along the lines of the Rick and Morty/Gravity Falls connections with tiny Easter eggs between the two projects. Unless things take a drastic turn, fans of the show and High on Life will never know what could have been.

Before there was High on Lifethere was Trover saves the universe. Created by Roiland and produced under his game development brand, the 2019 RPG helped establish him as a notable name in the indie gaming scene. Like most of his projects, this one had the same humor that made Roiland famous.

Roiland’s first foray into RPGs came about in 2016 with the release of the VR game, Accounting followed by 2017’s Accounting+, which was the same game but with additional content. With his name attached to the title, gamers knew to expect more raunchy, off-color jokes and plenty of Rick and Morty voices. Of course, the title itself is a joke, since Accounting is simply an ironic name for what amounts to a trippy Inception-style satire. The player begins as an accountant who is forced to try out a VR program that’s meant to increase productivity. Once in the CG world, players get more VR headsets that take them deeper and deeper down the rabbit hole that is the Accounting gaming realm.

Here is an interesting tidbit: Roiland serves as an executive producer on the much-hyped Michael Cusack-created animated sitcom, Koala Man. Having debuted on Hulu on January. 9, Cusack stars as Kevin, a father who creates his own superhero alter ego to fight petty crime in a hilarious fashion. Hollywood heavyweight Hugh Jackman is set to guest star as well. To recruit the likes of an A-list talent, Hulu/Disney must have a sizable investment in the project, and they’re not going to cancel it based on the scandals of one executive producer. In fact, it’s one of 10 EPs on the show. The most likely scenario is that he’ll be on hiatus until at least the legal issues are squared away.

Forgotten about this one? You’re not alone. Despite Hot Streets airing for three seasons between 2016 and 2019, this one flew under the radar. Fitting the Adult Swim format, this was a mature take on supernatural crime fighting with a Hanna-Barbera/Archer flare. It followed the antics of an FBI agent, his family, and a cowardly talking dog. Not only did they investigate paranormal supervillains, but they tended to kill them without much thought. The trouble was that Hot Streets was lost in the shuffle of many similar—and often better-received—shows.

Again, Roiland didn’t have a hand in creating this show. Rather, his production company, Justin Roiland’s Solo Vanity Productions!, was involved in bringing the series to life. Since only a small number of viewers remember Hot Streetsdeleting it from existence would go widely unnoticed.

Roiland was rubbing elbows with some stars when he lent his talents to him Acceptable TV. While not widely remembered, the show had one season with 20 episodes airing in 2007. He would work as both an executive producer and producer as well as having writing and directing credits. He also happened to work with his Rick and Morty collaborator, Dan Harmon, who co-created Acceptable TV with Jack Black and Rob Schrab.

If you ever feel conflicted between enjoying your favorite show or movie and the harsh reality of the creative forces behind it, there are plenty of shoulders to cry on. Separating the art from the artist becomes increasingly difficult in light of such serious allegations. Harry Potter fans completely understand how Rick and Morty Viewers are feeling right about now.

The thing about the entertainment industry is that it’s not uncommon for a celebrity to go from canceled to star again. Both Hollywood and the public in general have notoriously short-term memories. Churn out a fresh hit, and all is magically forgiven often when it shouldn’t be. What’s the future hold for Roiland? It doesn’t look good, that’s for sure, but there’s really no telling what could happen.