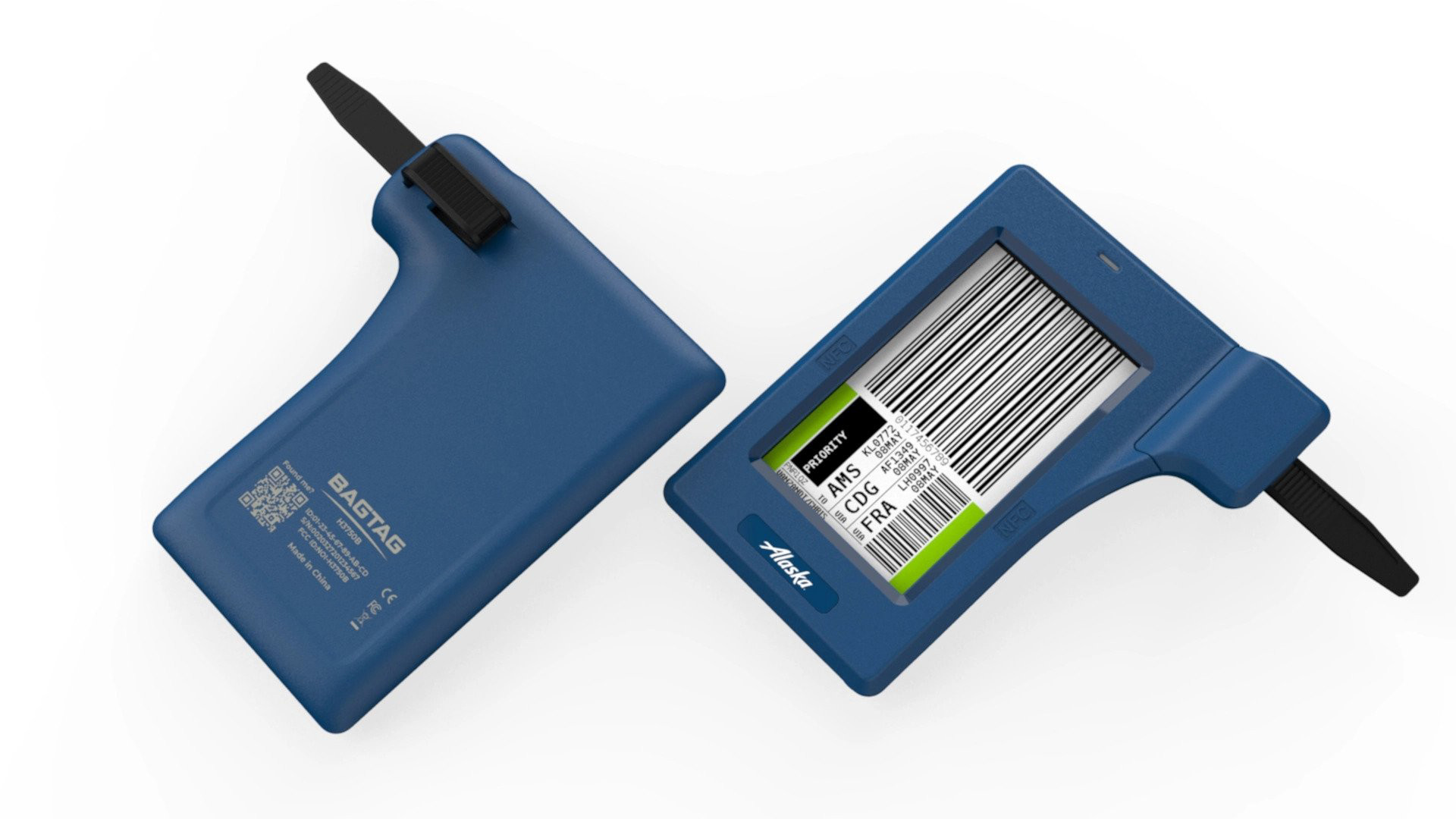 In an attempt to speed up bag checking and save the environment, Alaska Airlines is rolling out a new electronic bag tagging program, a first for the United States.

The airline is working with Dutch company BAGTAG (opens in new tab) to create these durable e-paper displays that will hold flight information and replace those long paper tags that we struggle to feed through luggage handles without accidentally sticking them to our hands.

You start by opening your ticket on the Alaska Airlines mobile app and place your phone over the electronic bag tag. According to TechCrunch (opens in new tab), the data will be transferred via NFC from your phone to the tag, which will display a barcode for your flight information. You can upload the travel information 24 hours before a flight.

From there, you strap on the tag via the on-device zip tie, drop off your luggage, and hop on your flight without having to print anything from a kiosk. And if you ever lose your bag, the devices come with a RFID (radio frequency identification) chip for real-time tracking. An Alaska Airline representative told us the new devices are compatible with older infrared sorting systems.

Alaska Airlines states the pilot program will roll out in “several phases,” as it’ll first appear at San Jose International Airport in San Jose, California. The airline expects to see the time spent dropping off luggage fall by 40 percent.

The initial phase starts in late 2022 when a group of “2,500 Alaska Airlines’ frequent flyers” will get first dibs on the electronic tags for free, according to the same representative. Then, starting in early 2023, members of the Alaska Airlines Mileage Plan will be able to purchase the bag tags for an undisclosed amount.

We also asked Alaska Airlines if and when non-member passengers can purchase the tags and for how much. According to the company representative, you must be a Mileage Plan member to buy a bag tag. It’s unknown how much the device costs and if the airline will expand this service to non-members.

Alaska Airlines revealed very little about the devices, but if you look at the manufacturer’s website, there is a very similar-looking one called the Flex (opens in new tab) albeit black. While it’s possible that Alaska Airlines may change certain aspects of the Flex, we can still look at BAGTAG’s device to see what people can expect.

It normally costs 66.07 Euros which is $67.14 if that price is any indication. The Flex is compatible with Android 5.0, iOS 11, and above. For security, it’s sports 128-bit AES encryption to protect your information and is IP65 certified. This means the Flex is totally protected against dust and water blasts but can’t survive submersion. Looking through the manual, it states the Flex charges wirelessly via the NFC chip; no cables necessary.

If Alaska Airlines’ device is anything like the Flex, it will certainly be a great piece of tech. Combine the tags with its new self-bag drop system (opens in new tab)and Alaska Airlines may have saved us from the drudge of going to the airport.

Hopefully, all this tech proves successful and is implemented elsewhere, especially at LAX, which is nothing short of a nightmare. If you’re interested in what else the airports are cooking up, we recently wrote a piece on high-speed internet coming to the sky.