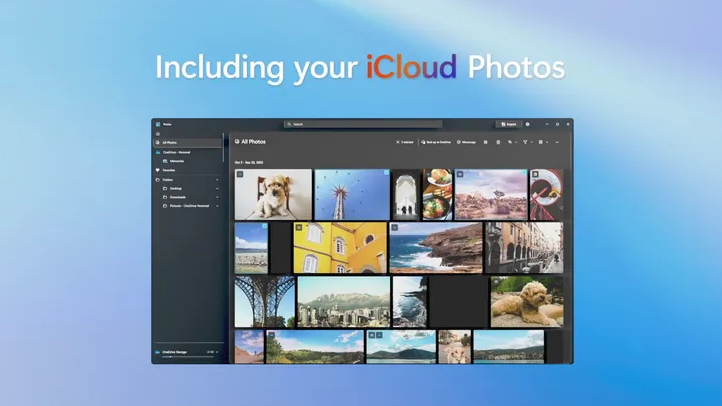 Microsoft has begun the rollout of iCloud photo library integration within Windows 11in the form of an update to the Photos app.

The announcement (opens in new tab) on the Windows Experience Blog from Dave Grochocki, Principal Product Manager Lead for Windows Inbox Posts, follows the company’s initial unveiling of the feature at its Surface event in October 2022.

Once users receive the update, they should download the iCloud for Windows app from the Microsoft Store to link their accounts.

Windows integrating with Apple’s own cloud storage solution is surely one of the first signs that the notion that Microsoft and Apple devices ought to be separate ecosystems is thawing.

As previously reported by The Verge (opens in new tab)iCloud photo library integration follows Apple Music appearing as an app in the Microsoft Store (although Windows users will have to wait until next year), and a native Apple TV app is also said to be coming soon in preview.

Microsoft claims that the decision to integrate the two platforms was made with user experience in mind.

“We know that many Windows customers have photo and video collections on their iPhones (opens in new tab) that they would like to be able to view on their PC,” wrote Grochocki.

“This iCloud Photos integration will make it easier for those with an iPhone to have direct access to all their cherished memories in one organized place and is another step in our continued efforts to make experiences on Windows 11 seamless.”

The new feature is similar to Microsoft’s recent decision to allow photo libraries on Android phones to be used with Microsoft 365 on the web. That integration works similarly, in that an additional app is required to link photo libraries across platforms.